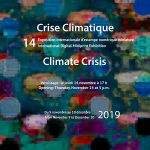 Climate Crisis
We don’t like to think about Climate Change [CC]. Even when we don’t deny it, we think someone else will deal with it. But the few who try are handicapped by us ignoring them.

Yet CC is already a growing threat. Take summer 2018: intense heat waves from Denver to Ottawa to Glasgow. 49°C in Oman, not going below 42° at night; 54 heat deaths in Quebec. One hundred major wildfires in the American West, giving birth to the new term, fire tsunami. 1.2 million flooded from their homes in Japan, 2.4 million in China, the Carolinas flooded with hog manure and coal ash. In California, history-making droughts, fires, and floods alternate symbiotically, creating calamitous mudslides.

And we are often unconvinced; we call these “freak disasters,” not the “new normal.” But in somber fact, they are an extremely mild preview of our best-case future with CC.

It gets more and more urgent to act now. We need to make this our problem — because it is our problem. There are so many choices for possible action. If we aren’t sure what to do, we can inform ourselves, think, discuss. We can spread the word, vote, demonstrate, make art. We can use public transport, buy a car that uses less or no fossil fuels, insulate our homes, reduce consumption, go solar, eat less meat. Those with more money can consider fossil fuel divestment, and donations to organizations that, for example, work towards tropical reforestation, or the adoption of renewable energies worldwide. Countering CC now is always cheaper than repairing, later, the ensuing damage. Hope comes from as many of us as possible, each devoting as much effort as we can, coming up with our own solutions, until CC is no longer the principal problem that we face.

The 14th International Digital Miniprint Exhibition invited artists to raise the consciousness of the public concerning Climate Change. With harrowing and visceral imagery, they depict the problem, its sources, and its implications. They express and share their reactions, warnings, and alarm. Their most recurrent motif is concern for the environment, questioning the callousness of humanity leading to species extinction, the destruction of nature and wildlife, and the loss of biodiversity. These artists feel and convey the suffering of a planet in distress, the pain of penguins and foxes, cheetahs and polar bears, bees and humans. They remind us that we only have one planet, and it is our responsibility to take care of it, nature, and ourselves.

They want us to know that there is a fragile equilibrium between forest and desert. Over and over, they portray angry elements of nature, fires and flooding, deforestation and desertification, reminding us how such disasters are becoming continually more frequent and devastating.

Many cast a critical eye on garbage and pollution, especially single-use products, and on cars that are neither built to last nor to be ecological. They reference the overconsumption, irresponsibility, desire for power, and love of money that have, together, brought us to this pass. Others share with us their anguish for future generations, the horrors that our children will experience, such as forced migrations and babies with not enough air to breathe. They use the visual code of death to show us the perils of ignoring CC and to urge us to better plan for the future. One artist sees humanity as frogs, being brought to a boil in a cauldron representing the Earth; some frogs haven’t noticed anything, while others try to escape. A couple of artists have been inspired by how CC already affects them, flooding their homes periodically.

These artists use their imagination to show us how everything is interconnected. They make this problem their problem, and draw us in to join the dialogue.

I reached my own personal climate change tipping point because of this exhibition, and I hope it will help others encourage others to react.