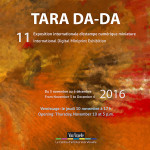 TARA DA-DA
Da-Da can not be understood. It must be experienced.

The world celebrates in 2016 the centennial of the greatest intellectual and literary movement of the last century, a revolutionary artistic movement that eventually became the forerunner of digital art itself.

In February 1916, in reaction to the bleakness of World War I, poet Hugo Ball and his female companion inaugurated the Cabaret Voltaire in old Zurich. Soon they were joined by a handful of madmen and visionaries. Their euphoria gave birth to the day of all possibilities: a cultural and counter revolutionary phenomenon which was named Dada.

From the outset, the baffling Dada, overflowing with enthusiasm and absurdity, blew through the arts as a fresh breeze. It rallied poetry, theatre, dance and visual arts. Dada is cosmopolitan, it extends from Zurich to Paris, New York and elsewhere.

The Dadaists, freed from conventions, and following Picasso and Braque, reinvent, among other proposals, the pictorial composition. The principle of chance and the granting of a new meaning to found objects guide their new approach to art. Named readymade, manufactured commercial objects are brought in a museum context, and collage and photomontage have arrived.

One hundred years later, Voix Visuelle invites artists participating in its International Digital Miniprint Exhibition to work in the spirit of Dada, to soak up this rich and crazy moment in the history of modern art. These digital artists immersed themselves in this period of eccentricities. They visited the elegant and outlandish shapes and forms of Dada art and culture, and its cacophonous sound poetry, and took inspiration from the freedom and absurdity of Dada games.

And they remembered that times are wonderful.